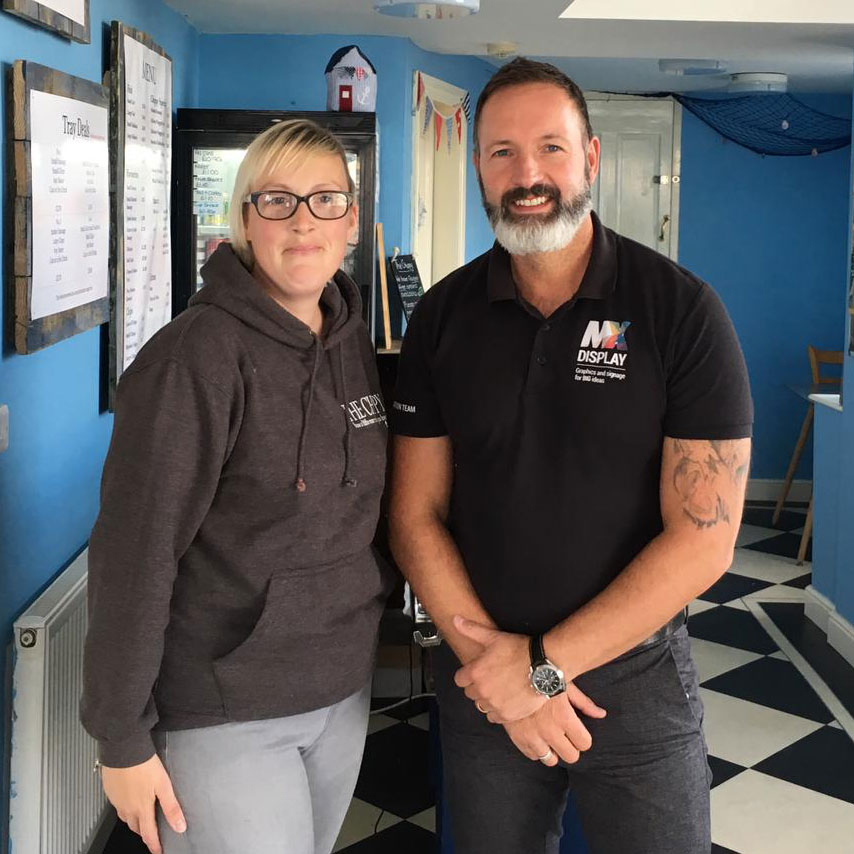 The much-loved Holyhead chip shop, The Chippy, has for many years been affectionately known by the nickname “The hippy chippy”, which was as a result of the “C” falling off the shop’s sign during a storm eight years ago.

When the shop underwent a refurbishment in 2016, the landlord reinstated the “C” into the shop’s new sign. The chip shop has since been taken over by new owner, Lora Jones, and it was during a segment with Romesh and Greg this week, that a local Holyhead resident called into the show to talk about how disgruntled he and other residents were about the “change” in name.

MX Display heard about the campaign to “lose the C”, and immediately made contact with Lora and the team to see if they could help; by offering to design, produce and install brand new signage, to help bring it back to its former glory, and help rebrand “The Hippy Chippy”.

Lora Jones, owner of The “hippy” Chippy, said: “I can’t believe what’s happened this week – things like this just don’t happen in our town!

I’m overwhelmed by everyone’s support, and for the team at MX Display to kindly offer us new signage is just amazing! I’m so grateful and can’t wait to see the new signs.”

The campaign has captured the imagination of the nation, and even got the backing of Welsh Olympian and commonwealth gold-medallist, Gareth Evans (who lives in Holyhead), who has added his support to the campaign on air this week.

MX Display’s Managing Director, Adrian Rushton, said: “We’re big fans of Greg’s show and when we heard the campaign unfolding on air, we jumped at the chance to help!

We’ve visited the shop and met Lora and the team, and now our teams are busy working on some new designs; we can’t wait for the big reveal live on Radio 1.”

MX Display is now working with Lora and the chip shop’s landlord, Tudor, on the redesign and installation of the new “The Hippy Chippy” shop front signage.

Greg James and his listeners are backing the campaign to the end, with an unveiling ceremony planed live on air, complete with an appearance from Gareth Evans, as soon as the signage is ready.